Head of Wallace: To be appointed

New Year, new beginnings. It’s time for Wallace house to forget the 21 years of hurt and finally stand in strong contention for the prestigious House Championship.

Members of Wallace house can see this goal is possible. It’s time to forget the fact that last year Wallace missed out by one point - even after winning the swimming gala!

If you have any ideas for charity events or how Wallace house could be improved further please contact the house captains or Mr Cripps. 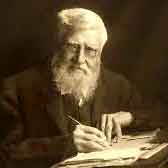 Wallace House was named after Alfred Russel Wallace, OM, FRS (1823–1913).  Wallace travelled the world discovering new species of plant and animal life, but was best known for proposing a Theory of Evolution due to Natural Selection and sending it to Charles Darwin which prompted the Darwin to publish his own theory.  At that time, Wallace was a world-famous scientist, more famous than Darwin, although these days we hear more about the latter.  Wallace does have a website dedicated to remedying this: The Wallace Fund, which contains a wealth of information on him and his contributions to not only biology, but also Land Reform, Glaciology, Anthropology, Ethnography, Epidemiology, and Astrobiology.  A busy man indeed!