Last year we achieved first place and are determined to maintain our position as the leading house at St Clere's school.

Brandon House is an ambitious and determined house who are always striving for the best. Our sporting teams showed great skill in last year's house events whilst our charity team worked tirelessly to support Alzheimer's (our designated cause).  Our behaviour across the school is also extremely commendable and as a house we were rewarded for our excellent conduct.

Brandon House is constantly improving and we are certain that this will only continue!

If you have any ideas for more House events, please inform Mr Rochester or one of your House Captains. 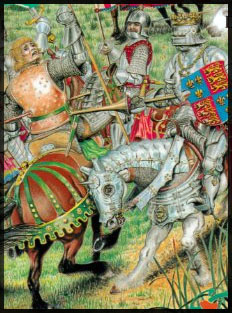 As Henry Tudor’s standard-bearer, William was killed Battle of Bosworth Field in 1485 by King Richard III himself.

The tide of battle turned however and Henry Tudor's forces killed Richard III, defeating his army taking the crown as Henry VII of England and Wales, thus ending the Wars of the Roses.

The defeated King Richard was buried by monks in a Friary in Leicester, but his remains were recently discovered during building works as the ‘King in the Car Park’ in 2013.