Dean has toured the UK for ten years sharing his experiences of being autistic. In recent years he has also spoken across Europe as well as undertaking four seminar tours of Australia and New Zealand. Through his humorous and insightful speeches Dean outlines his positive outlook on being autistic. In 2011 Dean's work was brought to a wider audience, as a clip of one of his speeches was viewed across the world on Youtube.

He is also an experienced journalist, having been published in local, national and international publications. Between 2008 and 2011 he worked freelance for Greenwich Time Newspaper, as both a features writer and columnist. For eighteen months, Dean edited the Network Autism 'Autism in Practice' newsletter which had subscribers in over 90 countries. He has also written for The Guardian, Londonpaper, News Shopper and NAS Communication magazine.

Dean is also a singer and performs at charity balls and various events nationwide.

Dean is honorary president of APCymru- an autistic led parent charity in Cardiff and is also patron of SPACE, a parent led charity in Hertfordshire, and ONE to ONE Enfield, a charity providing meaningful activities for LD/autistic adults. 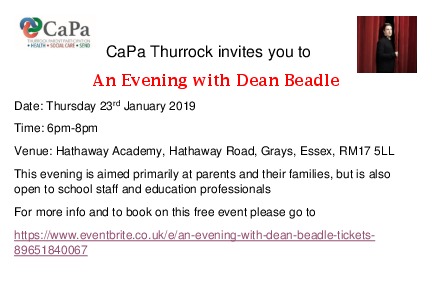